The Origins of Spring Cleaning

Spring cleaning is a time honored tradition. Children might think it a concept created by overbearing parents tired of berating them on a regular basis. Weary parents exhausted from a winter where much of life was spent indoors feel the need to reinvigorate the household. Spring is a time of rebirth…so, why not revitalize the home, too?

Interestingly, it seems there’s a bit more to spring cleaning than chore-loving families. The concept finds its roots in several different cultures around the world, which suggests there might be a deeply rooted religious, anthropological or biological reason pushing the need for spring cleaning.

Most cultures and religions are rich with tradition and ritual. As the story goes, when the Jews left Egypt ending 400 years of slavery they did so in such a hurry the bread they were baking did not have time to rise. That time in Jewish history is celebrated during the holiday of Pesach (Passover) during which Jews do not eat any leavened foods, which resulted in boxes of matzo (which look like large flat crackers) filling the cupboards of Jewish homes around the world. In fact, not only are Jews required to eat unleavened foods, they’re forbidden from owning or possessing any leavened foods.

This prohibition against even possession required the thorough inspection and removal of even the smallest particles of these forbidden foods. The Jewish calendar follows a lunar cycle, not the solar calendar used in the U.S., which means the Jewish holidays come at slightly different days on the Julian calendar, but it always arrives around spring. For thousands of years, Jews around the have been thoroughly cleaning their homes around spring.

In Iran, the new year arrives with the official change of seasons. March 21, the vernal equinox, marks the start of the Iranian calendar and, like the Jewish tradition, is marked by a rich history of tradition and culture. The first day of spring is a holiday known as Norooz, which is the Iranian new year and also the rebirth of spring.

Iranians take part in a tradition called khaneh takani or khooneh tekouni, which literally translates to “shaking the house.” The concept allows for the purification through cleanliness.

The ancient Chinese culture has its own cleaning history, again following the new year, which takes place shortly after the Western start to the calendar. The tradition involves sweeping the floors to rid the home of bad luck that and ill events that befell the home and family in the previous year.

The History Of Our Own Spring Cleaning 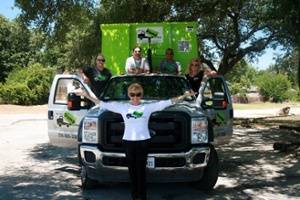 It’s even been suggested that the tradition has a much more practical reason. In America and Europe, before the advent of vacuum cleaners, March marked the time it was warm enough to open the windows but not so warm that the air was filled with bugs. It was the perfect time to dust!

Vacuum cleaners and central heating and cooling systems mean we no longer need to find the perfect balance between weather and insects. Culture and tradition will forever guide our practices, but even they’ve been adopted and adapted by a wider community.

We’ve moved beyond searching for breadcrumbs and sweeping out the dust: We declutter our homes, shed old and worn clothing and purge our unwanted toys and collected junk.

Whether your need to clean is driven by an ancient religious, historic or cultural tradition — or because that’s the way Mom always did it doesn’t matter. A Bin There Dump That rental dumpster is the perfect tool to help you finish the job! Available in several sizes, our bins fit easily in your driveway and can be delivered and picked up as needed. Consider a Bin There Dump That Dumpster for your spring cleaning needs!

For more thoughts on how to declutter your home, read up on the Bin There Dump blog. Or, find your local franchise operator on our website.