Habitat For Humanity: A Home For Everyone 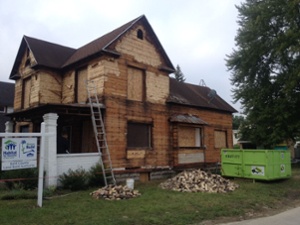 It's been called the American Dream, but it's hardly unique to the United States of America. It’s really more a universal dream: having the opportunity to create a life for yourself and your family. Part of that dream is to have a safe place to live.

For decades, Habitat for Humanity has worked to build homes for those in need using a network of volunteers. The organization has grown into an international organization, which as built or repaired more than 800,000 houses and served more than 4 million people around the world.

In 1985, the United Nations General Assembly declared the first Monday in October would be World Habitat Day.

Habitat for Humanity joins the United Nations and organizations around the world in raising awareness, educating and mobilizing individuals and communities to take action on the current global housing crisis.

It’s believed that the cycle of poverty cannot end with access to decent housing.

World Habitat Day is the a day set aside where the world has an opportunity recognize the basic right of all humanity to adequate shelter, and to encourage grassroots action toward ending poverty housing.

It would be easy to think that this is “OPP” — other people’s problem. People in Africa and Asia sit far enough away that their problems are suitably remote.

The goal is to create simple, decent affordable housing. Of course, each community has different definitions of those terms. And that’s fine. Habitat for Humanity’s goal is to help people using locally sourced materials.

A Look At The Facts 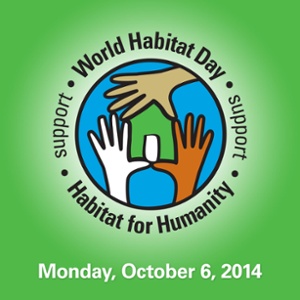 According to Habitat for Humanity statistics, there are 1.6 billion people living in inadequate shelter around the world. Of those, 1 billion of those live in informal settlements. More than 100 million people worldwide are homeless.

About one in four people live in conditions that negatively affect their health, safety, prosperity and opportunities.

Sadly, the situation is only expected to get worse. By 2030, UN-Habitat estimates an additional 3 billion people, about 40 percent of the world’s population, will need access to housing. This translates into a demand for 96,150 new affordable units every day — and 4,000 every hour.

By 2050, 70 percent of the world’s population is projected to be living in urban areas, causing slums and unplanned settlements to swell. Estimates of homelessness in the United States vary from 1.6 million to 3 million people. Most studies conclude that about one-third of the homeless are children.

Decent housing leads to safer neighborhoods and economic growth, which are key to breaking people out of poverty.

World Habitat Day comprises events around the world designed to help impoverished families and raise the awareness of those same people. Those activities range from constructing new homes, to fundraising to conferences and speaking engagements.

Volunteers can join an existing program or create one of their own.

Bin There Dump That is proud to work with Local Habitat for Humanity affiliates, providing them dumpster rentals for their projects.

If you’re in need of a dumpster bin, visit the Bin There Dump That website to find the franchise operator nearest you.